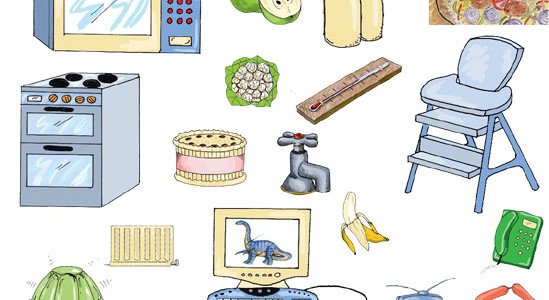 For visualisers who don’t understand symbols, pictures or signs, the closest to their native language would be a concrete, visible, spatial external language:

a language of objects.

The advantage of this mode of communication is that it may cover several languages as it is not only visual but also a tactile (when touched), kinaesthetic (when moved), auditory (when tapped) and olfactory (when smelt) mode. So communication via objects is also beneficial for those children whose inner language we cannot determine yet. Children can learn the ‘meaning’ of objects through appearance, texture, colour, sound and smell.

Tactile language – Children ‘speaking tactile language’ recognise things by touching them, feeling textures and surfaces with their hands, their bare feet or their cheeks, or putting them in their mouth. Through touch they get the information about the size and form of things, but not necessarily about their function or purpose. They store the information for later reference and may find similar objects (e.g., a plastic cup and a glass cup) to be completely different ‘words’ in their vocabulary because they ‘feel’ different.

However, just as there many forms in which a verbal language realises, the language of objects can be “oral”, “written”, and “symbolic” (for reference) – e.g., just giving the child to hold an object before the next activity will let him know (and get mentally prepared) for what happens next.

Objects can “talk” (and even “shout”) and leave ‘written messages’.

First, we have to remember that objects can be communicatively loaded (without our knowledge) for these children. Objects can instruct them what to do, for example,

– the mug on a window-sill will ‘ask’ a child to take it to the kitchen);

– a ball given to the child will inform the child that it is time to go to the park to play;

– the car key in the mother’s hand will ‘tell’ him they are going out); etc.

There also can be written instructions behind objects (of which we can be unaware of, but for the child they may be very ‘loud’.) For example:

“At home, the surroundings themselves dictated what to do. Mess told us to clean up. Papers told us to file them. Letters told us to answer them. The time told us which TV programs to watch, when to eat, bathe, dress and sleep” (Williams 1999a).

Sometimes, it may be an advantage, other times, a disadvantage for the child when the child might get the wrong message from the ‘written language of objects’. For instance, an autistic boy became very frustrated when he saw the folding chair in the corridor (and read that it meant they were going to the beach, but was taken to school instead). It took his mother some time to do a good detective job and understand the associations the boy had made and the reason for his frustration (Peeters 2000).

It is necessary to remember about the danger of ‘written texts’ we haven’t meant ‘to write’: for these individuals they are always there.

We shouldn’t assume that children with autism will understand the objects in the same way as non-autistics do. We should be aware of the different meanings objects may have for autistic children in contrasts to our interpretation of them. Thus, we conceptualise the communicative value of objects according to the common stock of knowledge and experiences that we have learnt in our culture, whereas for them it is not the concepts but rather the sensations/ experiences the objects elicit. For instance, when we show someone a watch (or tap at the watch) the message is read as ‘it is time to go’. If a child has no concept of time yet, for him it is the sound of tapping or the visual image of the watch that should be interpreted. It is our job to teach these children how to ‘translate’ the message.

Here we have to consider several issues:

Some children have very literal language: one thing has one word (name) only. For example, a child would know that a plate is a plate if it is the same plate from which she always eats. There is no such thing as ‘a plate’ (a concept of a plate) for her, but only ‘the’ plate. She cannot yet generalise objects. In this case, we have to start to work with the same objects, and then gradually introducing ‘synonyms’ for one and the same word (representations for objects); e.g., small (toy) objects with the same communicative and semantic meaning as the real objects. If we talk about cars, we will use toy cars (not match boxes), toy spoons for spoons, etc. Once the language of objects has been successfully learnt we will introduce a more symbolic use of objects, gradually moving towards photographs, pictures, symbols.

On the other hand, there are synonyms in the language of objects in autism which can be different to those in our understanding. If two things, no matter how different (for us) they are, elicit the same mental image for a child, these things will mean the same for him. For example, if two different things are made of the same material and visually or auditorily (when tapped) bring the same sensory image, a child may be confused which one is for what.

Symbolic use of objects

A note of caution should be sounded about the objects we use to represent activities (i.e. imposing a symbolic meaning on a real object). For example, if we use an ‘object schedule’ for classroom activities: a ball for play time, a book for work, a bag for going home, etc. and the child cannot understand that it is not an object but just a symbol for an activity (i.e., if he is still at a pre-symbolic level), then he will be very confused at learning that one can count balls, say, in his maths lesson or play with a ball at PE, because for him a ball means free time.

It is good to start with the ‘receptive language of objects’: to give them the functional meaning of things (in contrast to sensory feelings/images) and then move to the expressive one, i.e., teach them to communicate using the ‘object-words’. To make it easier to teach children about the functional meanings of objects by reducing the information overload, at the first stages you should communicate indirectly via objects about objects. Make the objects you are talking about your ‘audience’, with the child at the background.

The goal should be to move from concrete objects to more symbolic ones. This methods of communication is more ‘portable’ than others, as participants may use any object to represent other things in whatever environment they happen to be. Therefore, they don’t have to carry around bags of ‘words’.

And another thing to remember. Not all the children lose the language of objects when they acquire a more symbolic language for communication. Some remain ’bilingual’ (or sometimes ‘multilingual’) and can speak their native language and their second language depending on to whom they are speaking. It’s wrong to consider the language of objects as a primitive mode of communication if we do not speak it. There are higher levels of this language that can communicate plenty of information for those who speak the same language. The following extract from Donna Williams’s book Somebody Somewhere brilliantly illustrates the point:

“Night after night Olivier and I brought things for each other to experience. We were communicating, ‘touching’, and being moved through the medium of sharing objects. Olivier had collections of sequins and beads and spent hours and hours sewing them into intricate patterns. I left him flowers and he would talk to me through them. I did not need to explain to him that objects stood for or symbolised people. Olivier already used this system.”

Williams, D. (1999a) Like Colour to the Blind. Jessica Kingsley Publishers.

Written by Olga Bogdashina on behalf of Integrated Treatments.