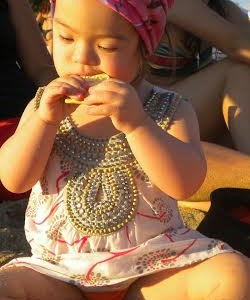 ‘We are what we eat’ – is heard all around us, and most people do try to eat healthy foods to improve their well-being. However, if we deal with autistic children there are many problems related to healthy food, balanced diet and eating in general.

To ensure that we fulfil the nutritional requirements of growing up children, we have to make sure that our healthy nutritional diet (with the correct proportions of proteins, fats, carbohydrates, minerals and vitamins) will get into their mouth. And this is a big problem for some autistic children (and their parents!).

Some children eat anything and everything, whether it is edible or inedible (pica). Others will refuse to eat 99% of food we offer, and the 1% that they do accept can be the ‘wrong’ food for them – causing allergies, ‘leaky gut syndrome’, leading to challenging behaviours. For some, food can be a source of fear. Others will accept their ‘selected food’ but only if it is presented the ‘right’ way, be of the ‘right’ colour, etc. or they reject it immediately and will go without any food for hours if not days. Many will refuse to try any new food and keep eating three or four items from the menu for years.

Feeding problems can start from birth (when a baby is very difficult at feeding times), or later. Some children will start off eating everything they are offered but then regress, usually at about 18-24 months. The children might restrict their total food intake to three or four items (e.g., potatoes, pasta, apples) and refuse to try anything from ‘outside of their menu’.

The most obvious ‘feeding problems’ seem to be related to taste/smell hypersensitivities. For some, almost all types of food smell or taste too sharp. Their sense of taste is so acute that if they are offered, for example, something they like (but a recipe has slightly changed) they would not accept it. If a tiny amount of new food is added to the food they like, it will be discarded as inedible.

Children with hypotaste/hyposmell chew and smell everything they can get – grass, flowers, dirt, play dough, toothpaste, etc. They sniff and lick objects, play with faeces. (However, not all ‘smelling/licking behaviours’ indicate hyposensitivity, sometimes it is the only reliable channel for the child whose visual perception is distorted so he/she has to smell everything to be sure what is in front of him/her. When visual problems are address, the behaviour disappears.)

What complicates the matter is, that the child’s sensitivity can fluctuate (from hyper- to normal/ hypo- and vice versa). What was a favourite food for years, one day can become absolutely unacceptable.

In this context, one should also mention idiosyncratic tastes: some will eat ‘incompatible foods’ together, for instance, ice-cream with gherkins.

Apart from senses of taste and smell there are other, equally important sensory perceptual issues, which contribute to the eating problems. Thus other sensory channels’ abnormalities can aggravate the situation. For example:

There are many other issues that can affect eating behaviours, most common being:

– The ritual is very important for many autistic children: they insist on certain rituals before they eat even their favourite foods, for instance, packages should be open a particular way, certain foods should be sliced a particular way, etc. A child can eat certain foods at home on Sunday, but refuse to eat the very same food on Wednesday or in school (because it is ‘Sunday food’ eaten at home), and vice versa: what is acceptable in school, is out of the question at home.

– Some are fearful of growing up and get very upset about it: they dislike changes in their bodies and reject food in hope that they stay the way they are if they do not eat. (However, some children, if told that this particular food will help them become strong and big, will be motivated to eat it.)

– Favourites: There are some foods (different for different children) that they crave (and often the favourite items are not on a ‘healthy list of nutritional foods’). Some children dip all the foods they eat into ketchup, or a particular sauce. [To be continued]

Written on behalf of Integrated Treatment Services by Olga Bogdashina